The shakuhachi is a Japanese bamboo flute, imported from China in the eighth century. The flute is extremely simple in construction, a bamboo tube with five finger holes and a blowing edge at the top. This simplicity allows the player a high degree of control over subtle inflections in pitch and timbre. The fundamental pitches of the shakuhachi are of the pentatonic scale named Yo (D, F, G, A, C, D). This scale is the equivalent of the major scale in Western music. The name shakuhachi refers to the length of the standard size instrument, the 1.8 shakuhachi. There are, however, many different length flutes which all go by the name of shakuhachi.

During the Edo period (1600-1868), samurai who had lost their masters became wandering Buddhist monks called komuso “monks of emptiness”. These komuso formed the Fuke sect of Zen Buddhism and composed the honkyoku (original pieces) to play on the shakuhachi as a form of meditation. The shakuhachi was not considered to be a musical instrument at that time but rather a hoki, an instrument of spiritual practice. The honkyoku of the komuso expressed their true feelings, from the heart, as they wandered over the countryside begging for alms and wishing to be delivered from earthly desires. They were in search of the elusive ichion jobutsu – “one sound become Buddha”. The honkyoku contains elements of the komuso’s samurai training in Bujutsu (military arts) and Zen Buddhism. In Bujutsu, the distance between the two blades decides which one will survive. In Zen Buddhism, reality lies in the distance between man and nature. In honkyoku, good expression is achieved by finding the right distance or ma (space) between two notes and two phrases. How deeply the shakuhachi player considers the meaning of ma, decides the quality of his or her performance.

The difficulty in realising good ma is that honkyoku have free rhythm and no beat. This poses a difficulty for many Western trained musicians (myself included), who rely on a clearly defined rhythm and beat to give a basic flow to the piece. When learning honkyoku, the student must first copy the teacher to get a feeling for suitable ma. The student must then find his or her own expression for the piece, which in Yokoyama Sensei’s words is a desperate matter taking on life or death dimensions, where the soul of the player is laid bare for all to see! I was encouraged to play as if these were the last notes that I would ever play. Or to play for someone as if these were the last notes that they would ever hear. Straight from the heart and directly in the moment.

The notation for honkyoku functions in a similar way to tablature. Each Japanese character denotes a different fingering, while the vertical lines indicate approximately how long to hold the note and frequently, how to shape the sound. Read down the columns, from right to left, the notation is used primarily as a memory aid, with embellishments and nuances learnt orally from a teacher. The honkyoku phrasing is directly related to the breathing of the performer i.e. the length of the phrase is determined by the inhalation just as much as the inhalation is determined by the length of the phrase. Austere melodic lines and subtle changes in timbre characterise the honkyoku, which are played in the pentatonic scale named In (D, Eb, G, Ab, C, D or D, Eb, G, A, Bb, D), the equivalent of the minor scale in Western music. The honkyoku is practised as religious music. It does not aim at melodic variation or development, as Western music does. It exists as an exercise in mindfulness, inviting the performer to be fully present in each unfolding moment, each tone, each breath. The honkyoku have been transmitted from teacher to student without gap, through various schools, from the time of the master-less samurai to the present day.

After the Meiji Restoration (1868), the Fuke sect was officially banned. From this time on the shakuhachi became a secular musical instrument, used in ensemble with the shamisen and koto in what is called sankyoku and more recently in modern compositions for shakuhachi and koto.The contemporary shakuhachi player usually studies a combination of honkyoku, sankyoku and modern compositions for shakuhachi solo and ensemble. It is the sound of the single bamboo however, that still most captivates the listener, inspiring a sense of stillness and space.

Below are two examples of honkyoku. The first, Asuka Reibo (Yearning for the Bell of the Asuka region). The second, Shika no Tone (Distant Cry of Deer) recorded live at a performance in Japan with Bronwyn Kirkpatrick and Anne Norman on shakuhachis. 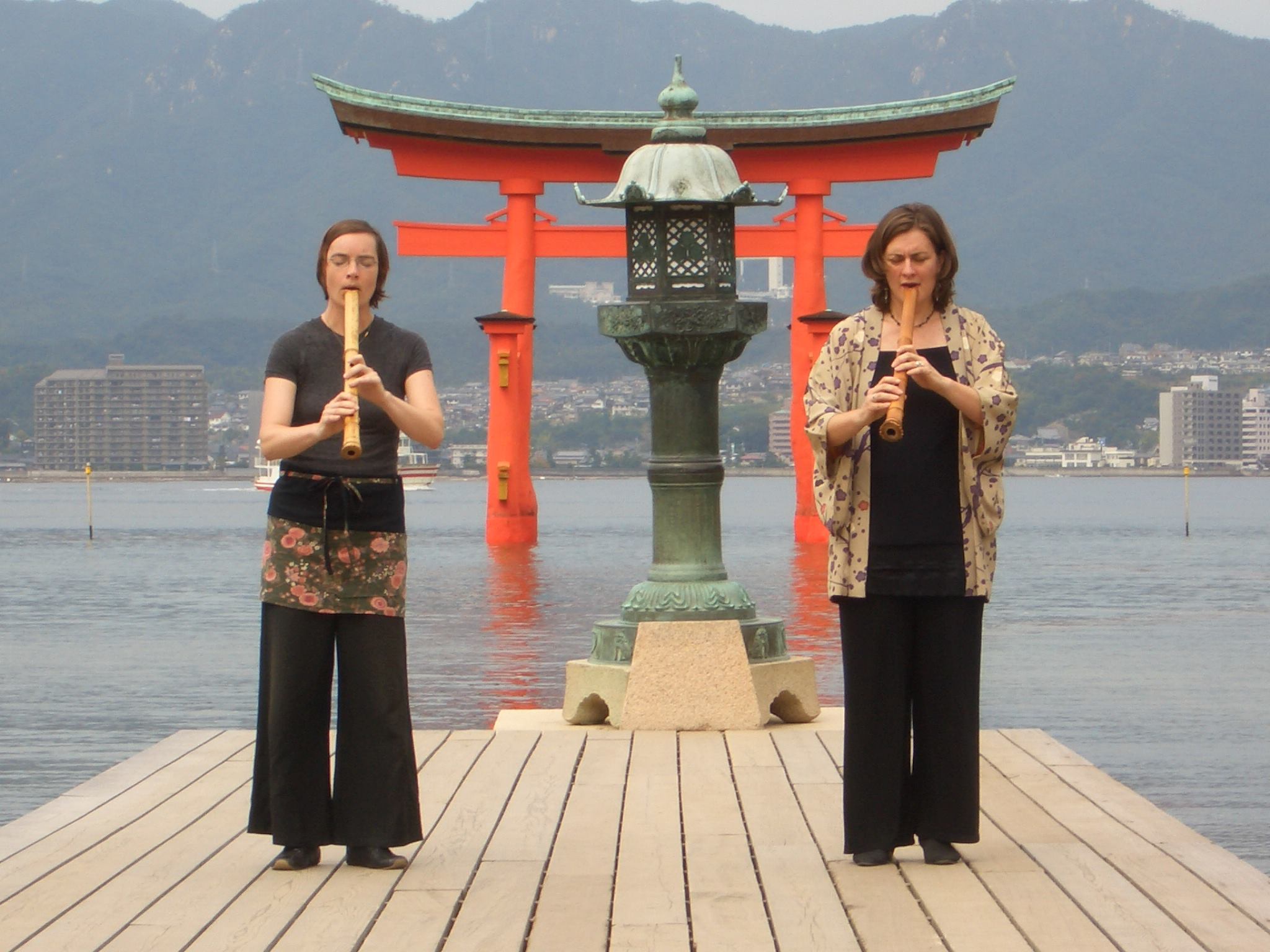